Is your car ready for winter?

As the upcoming season approaches, it’s important to make sure that it’s prepared as much as possible.

Here are a few components you should check as the cooler months begin to settle in:

Feel free to call HomeTowne Auto Repair & Tire if you have any questions.

Every two years, Northern Virginia drivers must have an emission test conducted on their vehicle.

This requirement applies to those who keep their cars in certain localities, such as Prince William County and the cities of Manassas and Manassas Park.

The emission test seeks to protect the environment by making sure the car releases the right amount of fumes into the air.

It is run by the Department of Environmental Quality (DEQ).

We confirm details about the car, including its weight and Vehicle Identification Number (VIN).

When testing a vehicle that’s older than 1996, inspectors use a sniffer tool that’s put inside the tailpipe. They also check for various components, including the catalytic converter, O2 sensors and the Evaporative Emission Control System (EVAP).

We use an OBD II connection device on newer cars. The DEQ computer plugs into the OBD II port on the car and checks for problem codes and system monitors.

There are a few ways you can be rejected for testing: if there are bald tires, an audible exhaust leak, or fluid that’s dripping on the dyno machine.

Why does that matter?

We have to make sure the vehicle is safe to run on the dyno, in case the DEQ requires it.

It’s that time of the year where the sun is beating down and many drivers are starting to notice that their vehicle’s air conditioning system isn’t doing the job.

Here are a few possible causes behind this problem:

Low on freon: The car could be low on refrigerant, which means that it likely has a leak. Air conditioning leaks could be coming from multiple locations, including fittings and rubber gaskets.

Malfunctioning expansion valve: It’s possible that the problem lies with the expansion valve, which helps control the amount of freon that flows through the A/C system. This component may not be working correctly.

Operator error: Today, the setup for car A/C systems vary. So, it’s very easy to hit a wrong button — or not the one you should. It’s a good idea to read the owner’s manual and make sure you aren’t missing something.

Constricted air conditioning condenser: You might also want to check to see if the condenser is constricted. Due to improper cleaning or an impact, the fins could become bent and block the airflow.

Like other parts of your vehicle, maintaining it is necessary.

Many parts make up an air conditioning system. The condenser is responsible for condensing the refrigerant that runs through it.

Cleaning your air conditioning condenser is one way you can maintain it.

You will want to start by removing leaves, bugs and other debris. This can be done using a shop vacuum that has a soft bristle brush.

Then, spray the condenser with air conditioning cleaner and rinse it off. For vehicles that have a compressor, a blow gun can remove some of the water.

On some higher end cars, there are air vents controlled by the car’s computer. They open and close when the air conditioning is on.

You may also want to check out the small fins on the air conditioning condenser. If there is some sort of impact or they are cleaned improperly, they can block the airflow that’s coming through. The fins will need to be straightened, which is a very time consuming task.

Annual state inspections have become a thing of controversy in recent years all over the country. Many states have removed them from their vehicle requirements altogether, and Virginia is considering doing the same. But is this really a good idea?

As of 2017, Utah is one of seven states in the United States that not does not require state inspections. This past summer, I traveled to Utah with my boyfriend and his family and immediately noticed that the cars with in-state licence plates had no inspection stickers.

At the time, I was unaware that they were not required to have inspections done every year, like Virginia. However, I did notice many more broken down cars on the side of the roads or in peoples’ driveways.

We even drove around town in his grandmother’s car, which was in very poor shape itself and an inspector would more than likely deem it an unsafe vehicle.

Between November 27 and December 1 of 2019, Utah State Police responded to 598 motor vehicle accidents during snowy weather.

It is immensely dangerous for states to stop requiring annual state inspections because people have no idea what they’re driving.

The majority of people do not know how to measure their brakes or tell if their exhaust pipe has a hole in it under their cab, causing them to breathe harmful emission gases.

It’s difficult for someone whose expertise is not in the general automotive field to diagnose a misfiring cylinder or tell if their upper and lower radiator hoses need replacing.

For someone who doesn’t know these things, maintaining a vehicle is nearly impossible.

Being required to take your car to a professional in the automotive field once a year should absolutely remain a requirement to keep everyone on roads safe.

If your vehicle is falling apart in places that you don’t know about, you put yourself and everyone else on the road in danger.

Many argue that doing away with state inspections saves the $20 a year or the extra $150 they would have to pay for an unexpected repair in order to pass an inspection. But that $20 to tell you your car is fine, or that $150 to fix an unsafe component is far cheaper than a lost life or a totaled car when that unsafe car loses a wheel or the brakes go out.

Annual State Inspections are required for everyone’s safety and removing this is compromising the safety of millions. Do yourself and everyone around you a favor, and get your state inspection done every year and don’t drive an unsafe car.

Do you want to save money and prevent auto repairs from cropping up down the road?

You can by taking care of your vehicle.

One way to maintain it is through an automatic transmission fluid exchange.

On Monday, Sydney and Jason performed an Automatic Transmission Fluid exchange on a 2010 Kia Forte.

“We hook it up in series to the car, and as the car is running it pumps out old fluid while the machine pumps in new fluid,” Sydney, a General Service Technician, explained.

For some vehicles, an automatic transmission fluid exchange is recommended every 35,000 to 45,000 miles. Others may not need it until they reach 120,000 miles.

As the fluid breaks down, it doesn’t function the way it should.

Automatic transmissions use hydraulic pressure and clutch plates. If the hydraulic fluid isn’t at the right level or working correctly, it can do premature wear on the clutch, which can lead to transmission problems.

The engine is one of the most vital parts of a vehicle.

Without it, a car is useless.

Its lifespan can range from a couple of years to a vehicle’s lifetime.

In addition to its check engine light turning on, the vehicle hesitated when accelerating and a tapping could be heard from inside the engine.

Checking the spark plug was the first step for the technician, Jason.

During a diagnostic test, there was a misfire on one of the cylinders.

The Jeep was also in need of an oil change. When he was removing the oil, Jason noticed metal shavings that resembled glitter. This led him to believe that the issue laid deeper in the engine.

A vehicle that needs a new engine may shudder or experience slower acceleration.

Other signs can include smoke from the exhaust and the check engine light turning on.

Proper maintenance, including regular oil changes, can help extend it.

The GDI (Gasoline Direct Inject) fuel and air induction service is specifically catered to GDI engines, which aim to provide greater power in a smaller engine.

It was standard that a 4-cylinder engine had excellent gas mileage but not a whole lot of power. Meanwhile, a V8 engine had a huge amount of power but was a complete gas guzzler, so it wasn’t very cost effective.

GDI engines are made to combine the best of both worlds by providing the gas mileage of a 4-cylinder engine with the power of a V8 engine. This is done by taking a 4-cylinder engine, adding a turbo, and running it like a diesel, making it the most powerful and efficient car currently available.

Of course, nothing is completely perfect without proper maintenance and care.

The problem that GDI engines encounter most often is a build up of carbon on injectors. They are constantly subjected to the harsh environment of the combustion chamber, causing them to quickly clog up with carbon and misfire.

In the advancement of the GDI engine, the injectors were placed where fuel does not get the opportunity to wash over the intake valves to prevent carbon build up.

This is where the GDI Fuel and Air Induction Service comes into play.

It is recommended to have this service performed every 15,000 miles, though it can be done earlier because carbon can start to build up as early as 3,000 miles. The induction services is done by a BG certified mechanic and they work to clean the areas that carbon has built up.

The process is as follows:

Once this service is performed, the customer will notice quite an improvement in gas mileage, power, and a decrease in emissions. This service should be performed regularly in order to keep the GDI engine running smoothly and at peak performance.

When everything is correct, the belt keeps the crankshaft and the camshafts in correct timing, and if it fails on an interference engine you could catastrophic damage to the engine, such as bending the valves or breaking the pistons. 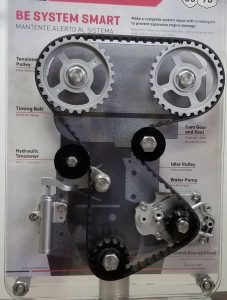 New timing belts should be installed between 50,000 and 105,000 miles. This depends on the make and model of a vehicle, the manufacturer recommendations, and the driving conditions.

From my personal experience, even though it has been recommended to change the timing belt at 90,000 miles, I haven’t had a problem pushing it to 105,000 miles. But these were Toyotas with two-inch-wide timing belts.

Not to sound derogatory, but the soccer mom — or dad — minivan gets driven hard like a high performance vehicle, just from running around and the stop-and-go driving. So you may want to stay on the manufacturer’s recommendation.

Besides, you don’t want to be stuck on the side of the road with a bunch of kids.

Your vehicle’s dashboard contains a number of tools that assure you that it’s working properly.

It also houses lights that have various meanings.

Here’s a guide to what each of the symbols indicate. 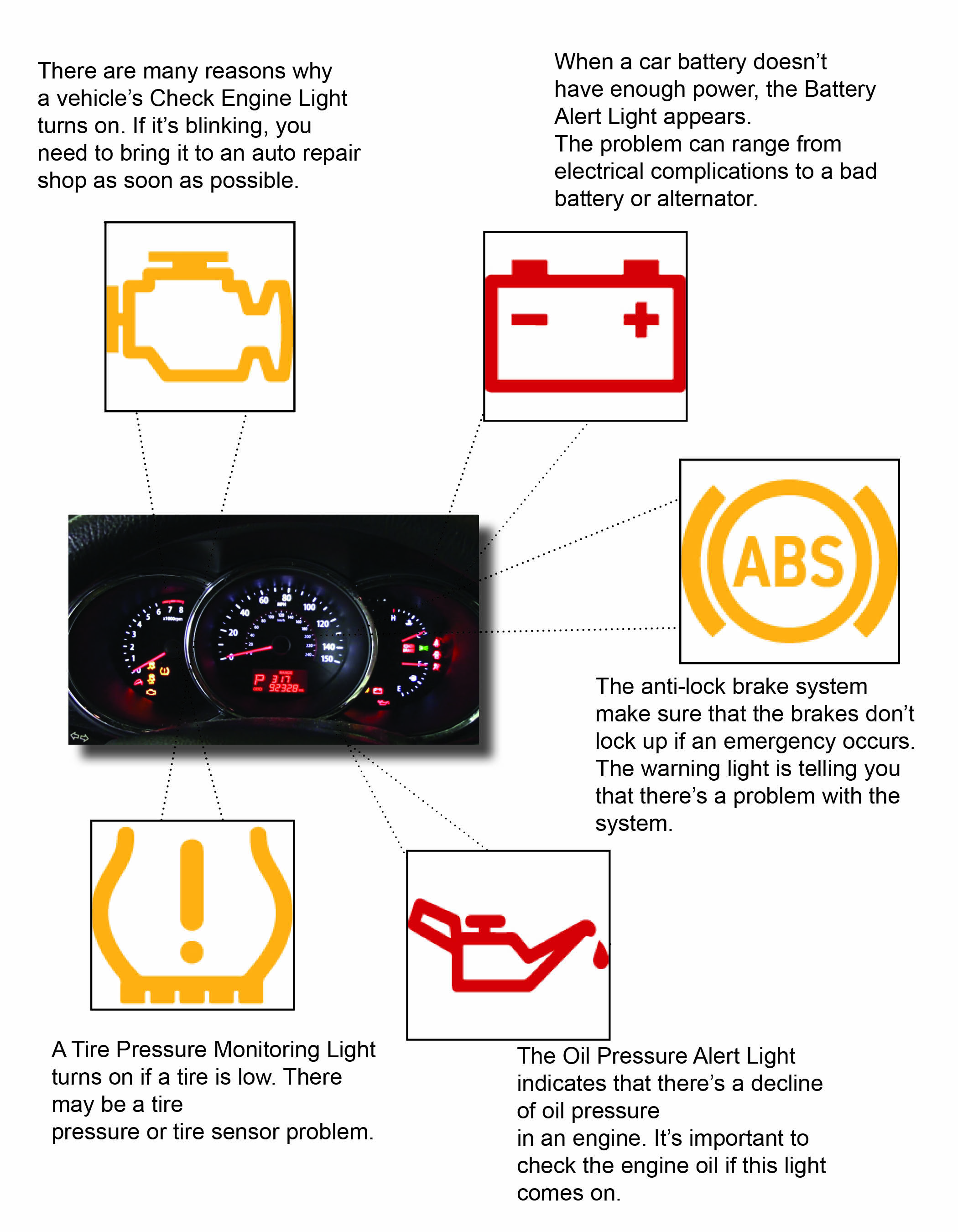