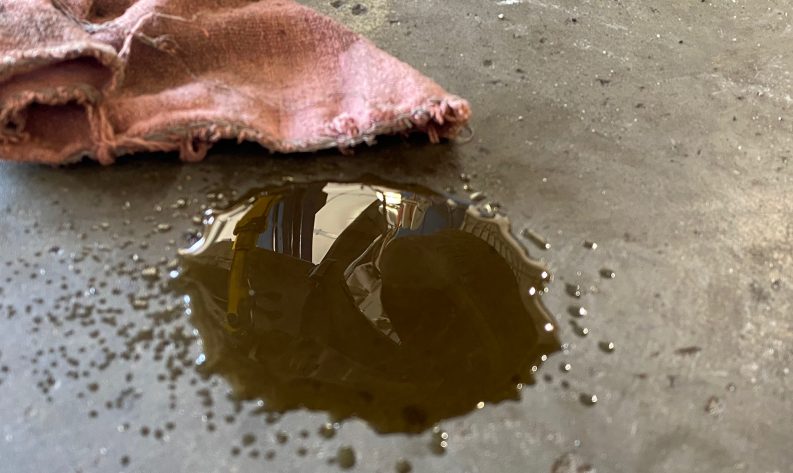 Oil leaks are nothing to brush off.

When you’re running on too little oil, damage can eventually occur to the engine and other parts. So, it’s important to have this problem addressed as soon as possible.

A 2005 Dodge Caravan was brought in because it was leaking oil. In order to safely get it to HomeTowne Auto Repair, the driver needed to add a quart or two of oil. There was a trail of fluid seen in the parking lot.

While working on the vehicle, we found that there was a major oil leak behind the timing cover, which was cracked. Because some bolts were missing, the technician needed to replace the timing cover and all related hardware. New seals, a new water pump, and a new timing belt were installed, as well.

Fluid leaking from your vehicle can be a warning sign that there’s a problem. You can figure out what’s leaking by looking at the color and location.

How to tell if you have an oil leak

There are a couple of different ways to tell if your vehicle is leaking oil.

If you check your oil and notice that it’s low, you may have a leak. This could also indicate an oil consumption issue.

The other thing you can do is check underneath the vehicle after it’s been sitting for a while. You should see fresh drips below the splash shields.

What causes an oil leak?

There are a number of possible causes behind an oil leak.

This problem can occur if a gasket or seal is bad. Various parts could also need to be replaced. These components include crank seals, cam seals and oil cooler seals. The valve cover is the most common culprit.

Vehicles that use turbochargers have inlet and outlet tube seals that can cause a leak.

Drivers who recently had an oil change performed should bring their car back to the repair shop, because it may not have been done correctly.

How oil leaks can impact other components

Oil leaks can have a negative effect on various parts, including the timing belt.

They may cause a problem with the timing belt if they are coming from the valve covers, front camshaft seals, sometimes the crankshaft seals, and even a balance shaft or oil pump shaft seal.

If that oil leaks on the timing belt, it can weaken the belt and cause it to break. This may lead to engine damage.

Oil leaks can also impact the serpentine belt, which is the drive belt that wraps around the engine accessories.

If the front crankshaft seal or another part of the top of the engine is leaking onto the belt, then the belt has a greater chance of slipping. That means your vehicle may not charge correctly, and the water pump may not turn properly if it’s driven by the serpentine belt.

The belt could also start to break or fray, preventing you from being able to drive your car.

If an oil leak is dripping on the exhaust you are more likely to see smoke. If there’s a significant drip – especially near the catalytic converter – the vehicle could catch on fire … which is bad.