HomeTowne Auto Repair and Tire wants “Hometowne” to be not just a name, but rather to create a sense of community with its neighbors and customers. That is why the shop has joined with Keep Prince William Beautiful to clean up the surrounding area.

Once a month, the team including owner, S.T. Billingsley, go out and pick up trash that has been left out in their area. The area they cover is Neabsco Mills Road from Opitz Boulevard to Dale Boulevard which is right across from Sentara Hospital’s Woodbridge location and passes the Potomac Club and Stonebridge where Wegmans is located. 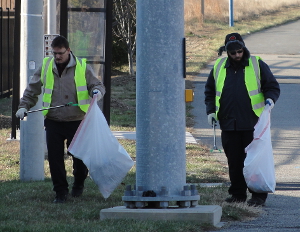 Some of the items they found remained pretty consistent. Five hour energy bottles littered the intersection of Optiz and Neabsco. Additionally, diapers in various stages of decomposition were prolific on the side of road. Thank goodness the team had grabbing sticks! Our HomeTowne Tire shuttle drove by
3 days later and found another diaper in roughly the same spot. We’re hoping to catch the invisible diaper villain!