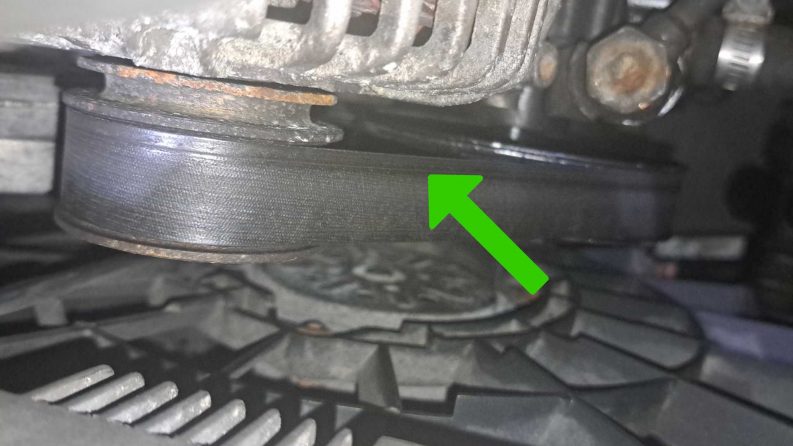 One of the important things to maintain on your vehicle are the drive belts, which include v-belts, timing belts, and serpentine belts.

Drive belts surround a lot of engine parts and ensure that they are operating correctly.

If you’re trying to replace the belts yourself, a lot of the time there will be a sticker under the hood of some cars and trucks that will show the serpentine belt routing.

Then, there are timing belts, which help the crankshaft and camshaft remain in correct timing. They are located around the pulleys.

Another type of drive belt is the v belt. V belts are typically used on older vehicles. During this time, you would have anywhere between two and five v belts on any one automobile, compared to a newer car that may only use one or two serpentine belts.

Stretch belts are the last ones we will talk about. Many Chevrolet SUVs and trucks use what’s called a stretch belt. There’s a special tool that you use to put it on. There’s no real adjustment anymore, it actually stretches onto the pulley and as it gets older you just change it.

When to change the serpentine belt

Serpentine belts can go as long as 100,000 miles before a new one needs to be installed. The belt replacement frequency depends on several factors – like what the car is used for and where it’s driven, how the belt is made, and recommendations from the vehicle’s manufacturer.

If you go to the beach often or drive through saltwater, you may be changing the belt more often. For example, the serpentine belts might only last about 30,000 miles for drivers who reside in Nags Head.

If you have reached 100,000 miles and are changing the belt, it may be a good idea to replace the serpentine belt tensioner as well. Even though the old tensioner may hold the belt on, it might not be holding it with enough force.

Sometimes, it makes sense to put on a new belt if nearby parts are already being replaced. A lot of the time, our Woodbridge mechanics will do this if we are installing a new water pump.

The belt can become worn due to mileage, but you also need to make sure things are in order. This includes the tensioner, tensioner and idler pulleys, and other pulleys that may be on the alternator, power steering and air conditioning. If the bearings are starting to wear on the idler pulleys, it can get out of alignment and cause more wear on the other side of the belt. So, sometimes it actually warrants replacing some of the pulleys along with the serpentine belt.

As part of our digital vehicle inspection, we check the condition of the belts, which can become worn or develop cracks overtime. There is a specification, depending on the belt and manufacturer, about the number of cracks you can have within an inch before needing a new one. We’ve also seen the “v” grooves of serpentine belts that ride in the grooves of the pulley become worn and turn more into “u” grooves or wear into the structure of the belt.

Another reason you may also need to replace the belt is if you’ve had an engine coolant or engine oil leak. That fluid can get onto the belt and ruin it or cause it to slip.

Whatever the reason why your drive belt needs to be changed, it’s important that whoever does the work knows what they’re doing and uses high quality parts. If they don’t, you may need to have the work performed again or pay a more expensive bill later on.