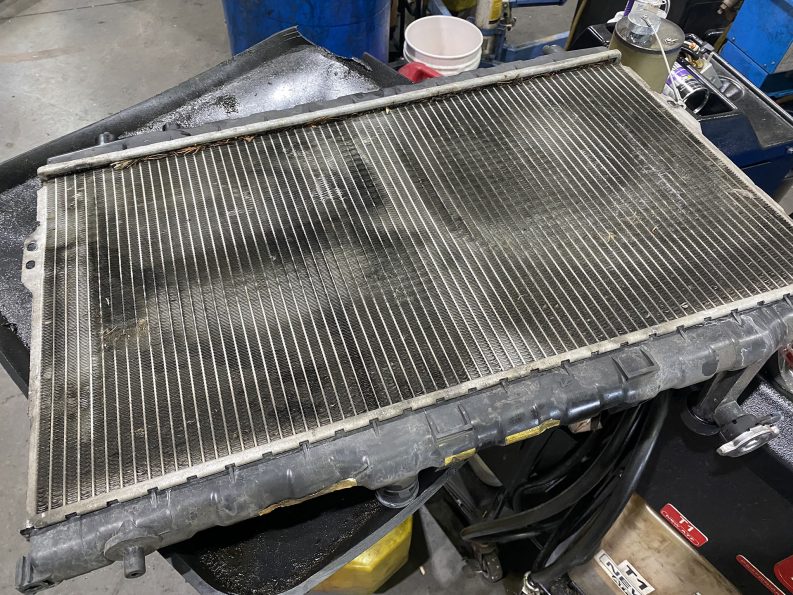 A car overheating is a good indicator that something is wrong.

If you pair smoke coming from under the hood with the vehicle being low on coolant, the signs may be pointing to a bad radiator. This happened to a Hyundai Santa Fe, which received a new radiator on Tuesday.

After completing the Hyundai radiator replacement, a coolant fluid exchange was performed.

We could have simply topped off the coolant after replacing the radiator. However, a coolant flush comes with a couple of benefits. Not only does it help clean out the rest of the system, it also speeds up the process of moving air out.

Check out this article to learn more about coolant fluid exchanges and why they’re important.

What does a radiator do in a car? How do I know when my radiator is bad?

A car radiator is one of the components that is responsible for keeping the engine cool. If everything is working correctly, hot coolant goes into the radiator and exits at a cooler temperature.

There is no set length for a radiator’s lifespan. They typically need to be replaced when they begin to leak or get clogged.

There are a few clues that you have radiator problems. Other than the car overheating or having less coolant than it should, you may notice a coolant leak or that the color of the fluid has changed.

Different culprits could cause a Hyundai radiator overheating problem. Most likely, there is a coolant leak or some sort of issue with the cooling system.

These are some possible reasons:

When it comes to radiators, you get what you paid for. Investing in a good radiator and high quality coolant can prevent engine damage and other problems in the future.

Our Woodbridge mechanics are able to perform radiator repair services and address Hyundai radiator overheating issues. In addition to replacing the radiator, we are able to remove and install new components that are associated with it and the cooling system.

If you are replacing the radiator, it’s a very good idea to change the upper and lower radiator hose, especially if you’re over a certain mileage – like about 50,000 or 60,000 miles.