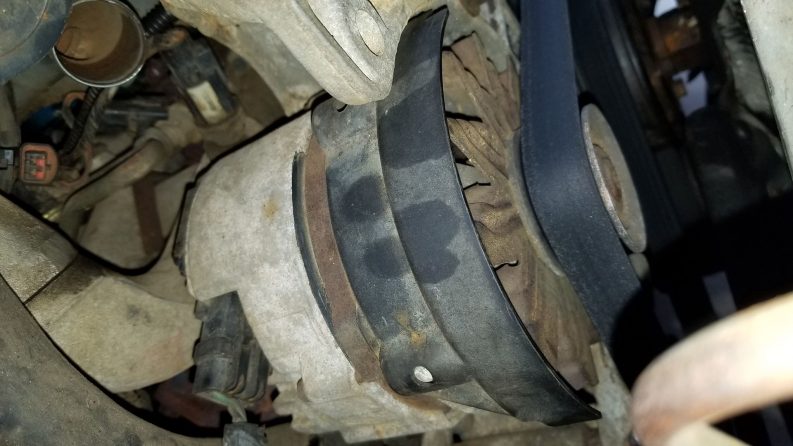 Are you having trouble starting your vehicle?

Your car alternator going bad could be the cause behind this problem.

Here are some bad alternator symptoms:

More in-depth explanations of each indicator can be found below.

Battery light turns on: One of the first signs that you would see if your car alternator is going bad would be when the battery light comes on. It can be mistaken for a regular battery issue, but really it’s indicating that the battery isn’t being charged. Alternators are designed to take the load from the electrical system and charge the battery. Generally, you see 13 to 15 volts with an alternator. The battery light may turn on if it goes below that, or if it starts reaching 16 or 17 volts, which indicates an overcharging problem. Overcharging can cause many other problems in your vehicle. Depending on the electrical load – that can be anything from the air conditioning running, headlights, wiper blades, the radio, even the electrical doors like those found on minivans – can make the battery warning light flicker. That’s because the alternator is fluctuating and trying to compensate for the vehicle’s electrical load. If you start seeing that, it’s a good time to bring your car in for us to check the electrical system and, specifically, the alternator. That way you don’t end up on the side of the road.

Noises from under the hood: Hearing noises that are coming from underneath the hood is another common symptom to watch out for. Due to age and wear, the bearings on alternators can start to go bad. You may notice a grinding or growling noise. You can confirm that this is the problem if the alternator is on top by placing a screwdriver on the metal part of it and holding the screwdriver near your ear. If you hear the growling sound coming from there rather than another area, then that will tell you that the bearings are the culprit. Other noises can occur if the pulleys aren’t aligned correctly or the belt pulley bearings are worn, which can create grinding or growling noises and may sound as if it’s the alternator. Whirring is another bad alternator sound that will increase in frequency when you accelerate and decrease as you let off the gas. That is a sign that the alternator is trying to work really hard and is starting to go bad.

Electronics stop working or have delayed response: If your car alternator is going bad, the electronics on a vehicle may act haywire or work slower than normal. On some cars, you can see the dashboard behaving strangely  – the gauges may be moving back and forth, the lights might turn on and off. Newer vehicles have so many electronics. The alternator’s main job is making sure the car is safe to drive on the road. So, it could begin turning off electronics to ensure the engine and brakes continue to function. Really dim or bright headlights are another sign of a bad alternator. The headlights can appear dim if the component is undercharging or overcharging, the lights may get brighter as you hit the gas.

Dead battery or battery is slow to crank: Do you have a dead car battery, or has it taken longer to crank? You might not need a new battery. The problem could lie with the alternator. As you’re driving, the alternator is responsible for charging the battery. If it isn’t able to do that well, but it has enough juice to keep the electronics running the battery won’t be charged correctly and the next time you go to start the car you’re going to either have a slow crank or no crank. It may just “click” – as if you accidentally left your headlights on. You can jump start your car so you can head over to a car repair shop. But if you experience this problem, you should bring the vehicle in so a mechanic can check it out.

Burning smell: In extreme cases, drivers may notice something that smells like rubber or electrical wires are burning. The electronics inside the alternator or the bearings become hot and, next thing you know, you’re starting to cook the insulation on the wiring in the alternator. If it’s an electrical short, that’s where you get the wire burning smell. Basically, it’s an electrical fire. When the alternator is being overworked, it tries to push too much electricity through there and will melt items. If you notice this issue, you should stop and maybe even disconnect your car battery, because if there is an electrical short you don’t want any electricity running through there.

Drivers who experience any of these bad alternator signs should bring their vehicle to a nearby repair shop. The technicians at HomeTowne Auto Repair & Tire are able to check alternators, perform courtesy inspections, and conduct diagnostic testing.