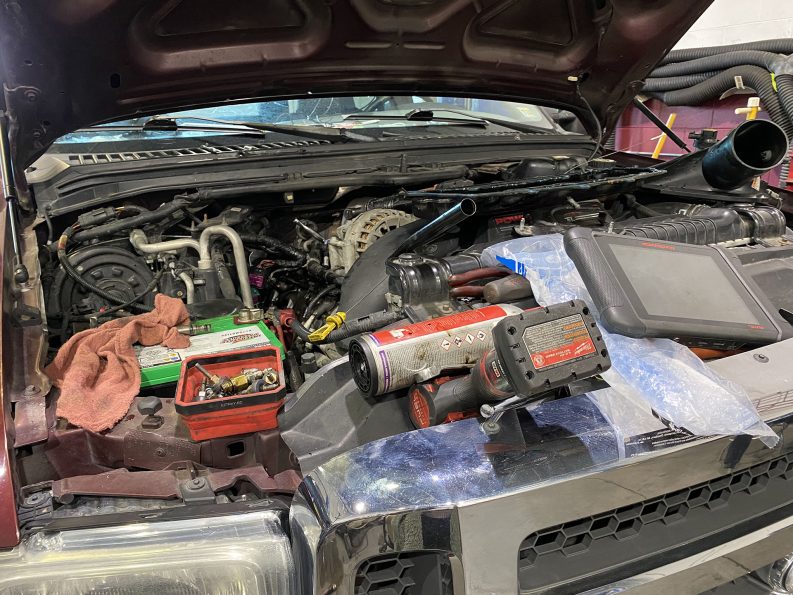 A crank no start is a common problem that can occur with any vehicle.

It’s the reason that a customer brought their Ford F-350 to our shop earlier this month.

When looking into the problem, our technician found that the fuel injectors weren’t pressurizing. A high pressure oil system is used to pressurize the injectors, because they need 500 PSI just to fire.

To determine the cause behind the pressurizing issue, he hooked up an air line to the oiling system and discovered a leak on the oil stand pipe. There was a broken o-ring, as well. When o-rings break, they will leak internally, resulting in a loss of pressure.

For this diesel, we needed to replace the oil stand pipe, which allows oil pressure to pump up the fuel injectors, and oil. They come as a set. The crank position sensor was also broken and a new one was installed.

Possible causes behind crank no start

A crank no start is a signal problem.

There are numerous possible causes behind this issue – so many that we wouldn’t be able to cover all of them in this article.

Fuel delivery is the most common reason a vehicle won’t start, because if it’s cranking that means your battery has juice.

Most vehicles have a fuel pump in the tank, and then you will have a high pressure fuel pump under the hood. Either of those components could become clogged or broken. Some automobiles have in-line filters that may get clogged. A lot of newer vehicles have their filters in the fuel pump. You might also have a simple relay or fuse go bad.

Fuel injectors have tiny needles that go in and out. They could become clogged, preventing the needles from moving. Usually, however, injectors alone won’t prevent a car from starting. Instead, the vehicle will start but run poorly.

The glow plugs, which are responsible for starting the engine on a diesel, could also be the culprit. They could have gone bad and need to be replaced.

Cam and crank sensors not functioning correctly is another possibility. This would be indicated by the vehicle’s inability to fire.

How determining the problem has changed

Years ago, vehicles had carburetors, rather than fuel injectors. Automotive technicians would follow the philosophy of “air, spark, fuel.” They would check those areas, and it didn’t get more complicated than that.

Now, it’s not so simple, because there are signals. Vehicles that are produced today have computers, parameters that need to be set, and security devices. Having so many more features at play can make the process of tracking down the problem a bit more difficult and time consuming.

Performing diagnostic testing on vehicles with a crank no start is one of the services we provide. If your vehicle is refusing to start, have it checked out by a car repair shop near you.